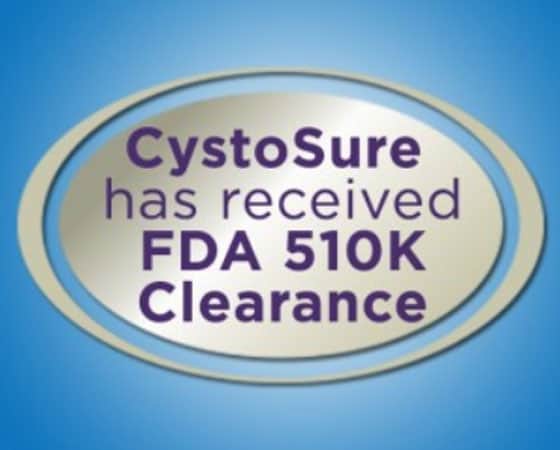 System Represents the First New Approach for Cystoscopy in Decades

Boston, Ma. – January 5, 2015 – Emmy Medical, LLC announced today that the U.S. Food and Drug Administration (FDA) has cleared its CystoSure® system for female cystoscopy. CystoSure® provides a simple, safe and efficient means for conducting cystoscopy at the office, in the operating Room, or at the bedside.

Cystoscopy is a commonly performed procedure used in hospitals and office to diagnosis lower urinary tract conditions. Traditional cystoscopy is complicated and cumbersome, preventing widespread use even when indicated. CystoSure®’s patent pending design, specifically designed for the female patient and their care providers, reinvents the game – providing a technique which is safe, simple, and standardized.

“Over a million gynecologic and urogynecologic procedures are performed annually in this country which have a risk or urinary tract injury but few undergo routine cystoscopy despite recommendations from our professional societies,” according to Jim Greenberg, MD and inventor of Cystosure. “Nothing has changed for female cystoscopy in the last 100 years so I created Cystosure to be easier for doctors and safer for patients.”

The CystoSure® system consists of two components: an 18 French 4-Way catheter and a small scope.  CystoSure’s proprietary  design allows multiple passes of the scope to visualize the bladder while lowering risk of trauma or infection to the urethra/bladder and improving patient comfort.In addition, the catheter design allows full and consistent bladder evaluation with a simple 360 degree rotation of the scope, obviating the need for a learning curve or cystoscopy experience. According to Neeraj Kohli, MD, MBA, Chief Medical Officer, “Cystosure is a game changer. It makes cystoscopy more accessible to physicians and patients alike while making the procedure safer, faster, and easier while saving doctors and hospitals valuable time and money.”

“FDA clearance of CystoSure® represents a new era of choice for clinicians who are uncomfortable with the traditional cystoscopy systems being employed today and need to evaluate the bladder in patients with hematuria, overactive bladder, and other urinary tract disorders in the office or the OR,” said Ron Adams, Emmy Medical president and CEO. “Emmy Medical is committed to improving the health and quality of life of women who are experiencing the challenges of managing urinary tract conditions. Cystosure is a big step toward the commitment.”

“This therapy represents a major advance in sleep apnea treatment for some patients who are unable to use or tolerate CPAP therapy,” said Meir Kryger, MD, professor, Yale School of Medicine. “Patients with moderate to severe OSA who are not on effective treatment are at an increased risk for cardiovascular disease, accidents and death.

There is a significant need for safe, effective and well-tolerated new treatments in the sleep medicine field.”

Patients implanted with Inspire therapy who participated in the company’s STAR (Stimulation Therapy for Apnea Reduction) pivotal clinical trial experienced a 68 percent reduction in apnea events, a 70 percent reduction in oxygen desaturation events, and significant improvements in daytime functioning as measured by two validated questionnaires. These results were published in the January 9, 2014 issue of the New England Journal of Medicine.

CystoSure® will be commercially available to medical professionals in the United States in the first half of 2015.

Emmy Medical LLC, based in Boston, MA, has developed the world’s first female specific cystoscopy system. The CystoSure® system utilizes a flexible urinary catheter to establish an access pathway and incorporates a proprietary scope port which enables the clinician to conduct  diagnostic cystoscopy without needing to remove the drainage catheter. Emmy Medical was formed in 2013 when the technology, and a provisional patent needed to be converted into a formal patent submission.Visit us on the web at www.cystosure.com.